Apparently those Scots in their kilts with their genitals flying free were onto a good thing! Wearing kilts traditionally (without underwear) in the cold, rugged Scottish highlands is the perfect “physiological scrotal environment” to make strong sperm, according to Dutch researcher, Erwin Kompanje.

Kompanje says the modern man with their tight pants and underwear are confining their “scrotal environment.”  So while Kompanje wants to research this aspect of kilt wearing because of his own “hunch” about the Scots and kilts, his research idea is based on the fact that healthy sperm need to be a few degrees cooler than the body. Kompanje says, “The cremaster reflex only works, and has 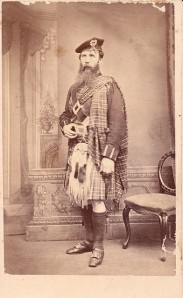 any sense, when the scrotum is hanging free.  In tight trousers it cannot work. In a naked man, or a man wearing a kilt, it can and will.”

Kompanje goes on, “I searched the scientific literature, and I found nothing on the subject,” he said. “Then I searched on sperm quality and found many scientific papers related to high scrotal temperature and tight clothing. So as 1+1=2, I formed the hypothesis that wearing a skirt-like garment (as a kilt) without underwear would help to improve sperm quality.”

“Wearing a kilt has strong psychological benefits…  A kilt will get you noticed no matter where you are. Research indicates that men wearing a kilt experience a strong sense of freedom and masculinity…The kilt gives a man a sensuous awareness of his own body and how it will be seen by others.”

He is looking for volunteers for his research if anyone wants to wear a kilt non stop! This Scottish obsessed research urges that it will be easy to find men to have the temperature and quality of their sperm measured under their kilts because of the “positive attention from sexual admirers” that kilts generate!

I had fun putting up this article, and perhaps it was just an excuse to look at photos of men in kilts! What do you think? Do you laugh when the Doctor tells you not to have a laptop on your lap, in case you damage your sperm? What about the research that shows that men wearing cooling testicular devices had more fertile sperm?  Would you wear a kilt for research?