Today is Intersex Awareness Day!
The word “Intersex” describes a person who doesn’t fit the typical and binary definition of male or female.

Intersex conditions are natural variations of the internal and external sexual anatomy. Intersex is a physiological state – not a sexual or gender identity. 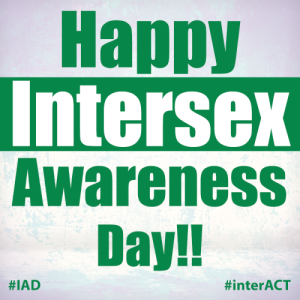 Doctors often perform “normalizing” surgery on intersex people without medical reasons. Often surgery is performed on babies or children for “appearance reasons” and the parents are told to raise their child as the sex that has been assigned to them. This can lead to confusion and mental health issues as intersex individuals grow up not feeling “right.”

Imagine the confusion and trauma from finding out that a procedure without your consent was performed on you as a child.
“For most of my life, I haven’t felt in control of my body. But what I can control is how people perceive this condition and my relationship with it. And I want to say that this is my body. And my story. Let me decide what’s to be done with it.”
—Intersex Youth, 17

Most intersex advocacy groups strongly oppose irreversible genital “normalizing” surgery at infancy. This surgery often has no safety or health reasoning but is done to four to five babies every day. Our society’s binary view  of sex is is behind  these surgeries however gender is a broad continuum and it’s really hard to draw a line somewhere neatly in the middle.

In 1965, psychologist John Money started the medical procedures of “normalising” intersex childrens genitals and encouraging the parents not to tell their children.  It’s only through the campaigning of intersex advocacy groups and Intersex adults who were forced to undergo such procedures, that Doctors are finally admitting they were wrong. Groups are campaigning to stop the secrecy, shame and unwanted genital surgeries for people born with anatomy that someone decided is not standard male or female.

The Intersex Society of North America has learned from talking to Intersex individuals and their families that;

Check out this great resource by an Amercian group of Intersex Youths. The group focusses on giving Intersex youths their voices back.

Below are some informative videos to watch and share to help raise awareness about Intersex conditions… Happy watching!