In 2014 Coopers faced some flack for their Halal accreditation for their malt extract products. There were a lot of angry Coopers customers who didn’t appreciate how their favourite beer was paying a religious tax. Now Coopers are facing a massive social media backlash and boycott after this ‘Keeping it Light’ video by the Bible Society has been released.

It features liberal politicians Andrew Hastie (an agnostic same sex marriage supporter) and Tim Winton (a christian who does not support same sex marriage) hanging out in a parliament cafe having a chinwag.

Coopers has just released a special beer to mark the 200th anniversary of the the Bible Society of Australia.  They will release 10,000 cartons of light beer with Bible verses printed on the outside. This charity claims they are not anti same sex marriage and that Coopers had no idea the video was being made.

Pubs have responded by refusing to sell Coopers and throwing out all of their Coopers into rubbish bins in the laneways behind their establishment. SBS responded by making a satirical video of Coopers and mocking Christians.

Watch the video and let me know what you think.

Do you think it’s a shameful publicity stunt and is highly offensive or do you think it is as Coopers have said “a debate that needs to happen.”  Hmmm… What do you think of Coppers continual sponsorship of the Liberal party?

“It certainly made it hard to keep it light and we really didn’t want this to be a bad reflection on Coopers. Perhaps a bit of naivety on our part the way that we did the video. The light-hearted nature got the better of us. There was no sponsorship arrangement at all with Coopers.”

Coopers have always been a Christian company and supporting multiple charities. They’ve sponsored LGBTIAQ+ festivals in the past and haven’t explicitly stated they’re anti-gay marriage. However they haven’t come out against the video either. Edit-they’ve just come out and apologised. 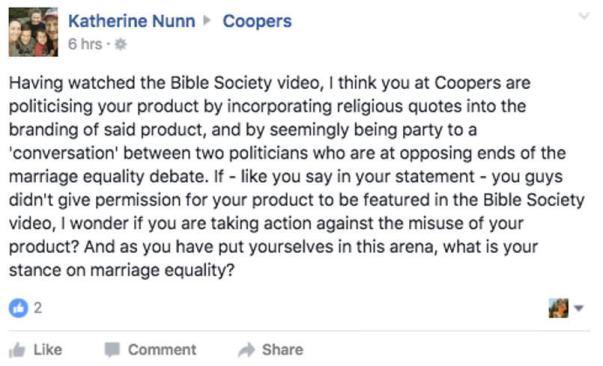