If you know the ins and outs of sexology and sex history you might want to watch it a few times to spot all the multitudes of references in there! And look at this magnificent, pink  room with a big crimson internal clitoris bedhead (maybe?) above the couch! So lush and glam!

For nearly all of recorded human history, women’s sexuality has been defined for them by men. Men have focussed on the vagina as women’s primary sexual organ because it happens to correspond to their idea of sex (i.e. vaginal penetration). And, let’s face it, vaginal intercourse feels good to most men, and it most often leads them to orgasm. Unfortunately, this is not the case for most women!

The colourful video clip takes on us an exciting and colourful historical journey from a woman’s perspective about the clitoris and sexual pleasure. Dorian even has internal clitoris earrings that appear to glow in the dark! 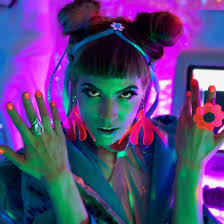 We travel through hyper-real, colourful scenes through witch burnings where religions have controlled female sexuality, the male form as the ultimate model in Ancient Greece, references to Pandora and her box, medicine in the 1700’s on a dissection table and psychology and we even meet a very drag, complete with suspicious unruly beard and glasses consisting only of frames-Mr Freud himself.
Freud believed that clitoris sexual stimulation was immature and childish and that a real adult woman would only enjoy sex through vaginal penetration. He called the vagina “an atrophied penis.” I love the scene where Dorian transforms into a mock “little girl” sending up Freud’s propositions that only women who were immature acting like little girls liked to enjoy clitoral pleasure. There’s a lot of playful imagery to make a more serious point. 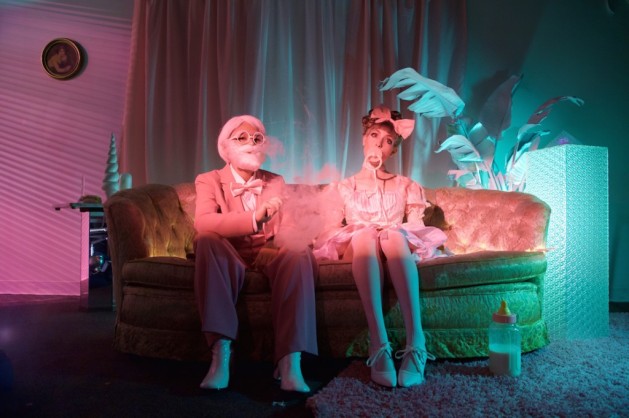 Dorian talks about how studying Freud’s ideas impacted her sexuality growing up,

My classmates and teachers were all very immediately critical of Freud, and although I was, too, I wanted to try to get as much value as I could out of reading his works and perhaps I took him too seriously, because this notion of the clitoral orgasm being immature kind of stuck with me. It started to subconsciously fuel this idea that I was immature, that I wasn’t fully a woman because I didn’t embrace my passive, receiving role in heterosexual, vaginal intercourse. So, as you can see, I have some personal beef with Dr. Freud that I needed to resolve with him publicly in this music video.

Dorian Electra even visits a very glam, hyper 60’s world of Masters and Johnsons lab where they tried to understand female desire.

There’s even pretty glass hanging internal clitorises! I can’t tell what they’re hanging off.. Is it a wind chime? Is it a clitoris chandeleir? Whatever it is I want one!

The delightful singer wears a full body clitoral suit in one scene and dances about in co-ordinated moves with women wearing shining vulva bodysuits. The climax (see what I did there?) is when the internal clitoris is finally discovered and mapped and the world is shocked because it’s ten times its size.

Dorian Electra explains why she made the video,

Women’s bodies are too often sexualized and objectified for the pleasure of others. In order to combat that, I wanted to create something to educate about women’s sexuality, history, and female sexual anatomy that was from a woman’s perspective for a change! I’m a pop musician, and I like to use sex appeal as a tool and a part of my art.

The more people understand the breadth and variety of women’s experience, the more we can accept, understand, and celebrate the diversity of those experiences. And, furthermore, not just to women, but to all gender identities, children, and especially teens who are just learning about their own and others’ bodies. The ideas we learn about sexuality at a young age are so important and can stick with us for the rest of our lives.

I’ve posted the lyrics are below for your enjoyment..

Learned men of science
Still some would deny it
Anatomists’ dissections weren’t enough for them to buy it
The few who did uncover it
Would argue who discovered it
This excavated treasure, the source of woman’s pleasure

They say I’m frigid and cold and I need to be controlled
Or that I’m too hot, demented, disordered, hysterical
Or that I’m crazy or lazy too mild or wild and baby
They get to decide what’s natural and factual

Even doctor’s textbooks
Yes, they would forget it
The clit they would omit and really not even regret it