Skip to content
“Women are receiving sexually explicit rape threats online such as, ‘I will fuck your ass to death you filthy fucking whore. Your only worth on this planet is as a warm hole to stick my cock in’.”

“There is good reason to believe the normalisation of “Rapeglish” online is both a symptom of and a contributing factor to the far-broader problem of gendered violence offline.”

A few years ago Dr Emma Jane interviewed me and my experiences as research into gendered cyber hate online and for her latest book, Misogyny Online: A Short (and Brutish) History. Dr Jane is an amazing powerhouse of research and has won soo many awards for her journalism, fiction and academic writing that I can’t keep up! ! She has published nine books including a novel, Deadset, which won the Commonwealth Writers’ Prize for Asia and the South Pacific for Best First Novel in 1997 and is  a Senior Research Fellow and Senior Lecturer at the University of New South Wales. Basically she’s amazing and here’s a photo of her with Mr Squiggle! 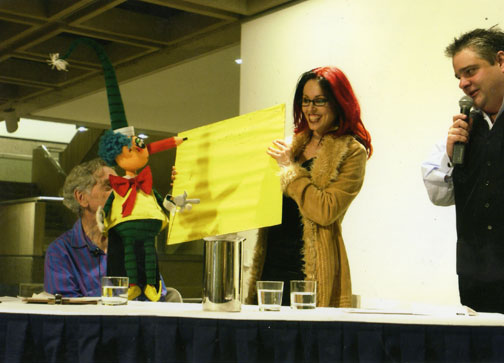 Here’s some  quotes from her book “Misogyny Online.” Dr Jane speaks about how the internet is providing a new medium for traditional and harmful attitudes to women that reduce women to their sexual value that in turn perpetrates the cycle of sexual violence.

Many waves of feminist activism and theory do, however, support the contention that while the cyber medium may be new, the ‘fuck you up your shopworn ass’ message has ample historical precedent.

It belongs to a far older tradition of gendered abuse and oppression: one that reduces women to their sexual – or lack of sexual – value and then punishes them for this self-same characterisation.

Hot women are just asking for coerced sex because they are hot and leading men on.

Women who are not hot enough are just asking for coerced sex because they must be taught a lesson for lacking the obligatory requirement of hotness.

As I will show over the course of this book, threats to rape women because of their supposed ‘unrapeability’ are circulating with astonishing frequency. At the same time men enthuse about wanting to rape certain women as if this is a high compliment.

In many sectors of the internet, graphic rape threats have become a lingua franca – the ‘go-to’ response for men who disagree with what a woman says, who dislike the way a woman looks, who are unhappy with the response to the unsolicited ‘dick pics’ they keep sending, or who simply believe, as one commentator recently put it on Facebook, that all women are ‘cunts’ who deserve to be ‘face fucked’ until they turn blue (cited in Chalmers, 2015).
Misogyny, in short, has gone viral.
When women speak up about being attacked online, they are frequently instructed to stop complaining and toughen up. ‘It’s just words,’ they are told. ‘It’s just the internet.’
This book, however, shows that gendered hate speech online has significant offline consequences. Female targets suffer socially, psychologically, professionally, financially, and politically. Gendered cyber hate is having a chilling effect in that some women are self-censoring, writing anonymously or under pseudonyms, or withdrawing partly or completely from the internet. Further, more and more attacks which begin exclusively
online are spilling into offline domains….
Focusing primarily on gendered cyberhate involving male attackers and female targets is necessary because of the overwhelming anecdotal and empirical evidence that women are being attacked online more often, more severely, and in far more violently sexualised ways than men.
Female targets of cyberhate often receive extremely specific communications about how, where, and even what time they will be violated. Also included maybe explicit details about which orifices will be desecrated via which instruments, as well as the names of the family members and children who will be forced to watch. These are not the types of tweets, Facebook messages, and emails typically received by men. Further, the misogyny, sexualised vitriol, slut shaming, and threats women encounter on the internet sit squarely within a much broader problem: namely the grossly high levels of violence that continue to be perpetrated against women and girls around the world (‘Cyber violence against women and girls: A world-wide wake-up call’, 2015: 13).
With regard to cyberhate directed at men, I note that while the ‘ugly, fat, and slutty’ trifecta is hurled at women with monotonous regularity, I have yet to witness any men being attacked via this particular combination of insults. While there is an abundance of homophobic slurs and accusations relating to a condition we could call micro-penis syndrome, the low-level argy-bargy experienced by men (or at least by straight, cisgendered, white men) is very different to the abuse experienced by women. Norms do exist around physical appearance for men, but there is no corresponding fixation with men’s ‘fuckability’ or ‘rapeability’. This reflects the broader fact that men are not traditionally shamed for promiscuity or sexualised self-representation.

There is still no male version of the word ‘slut’ – or at least not one with derogatory connotations.

When the rhetoric of sexual violence is used to abuse men online, it is often delivered via attacks on their female partners and family members(Jane, 2014b: 565). In 2011, for instance, an attack on the former US television talk show host Jon Stewart included the posting of photographs of his wife alongside disparaging comments about her size and attractiveness. These included: ‘Most lib’s chicks are pigs’, ‘She a liberal. They only come in ugly’, and ‘Looks like a trip to Auschwitz might do her some good’(comments beneath ‘Jon Stewart’s wife Tracey is overweight, unattractive’,2011). Another example is the case of the Australian footballer Robbie Farah who, following the death of his mother, received a tweet reading:‘I’d still fuck your mum, I will have to wear a gas mask to help with the smell of decomposing flesh, but I’d fuck her hard’ (@maxpower118 cited
in Thomson, 2012). What have your experiences been online? Have you been bullied or attacked online and if so, how have you reacted?