The clitoris is the only human organ whose sole function is sexual pleasure.

Most people think the clitoris is just a small “knob” at the top of the lips under the hood. This “glans” has 8,000 sensory nerve endings -that’s more than double the nerve endings in the glans of the penis and more than any other area on our body!

The clitoris interacts with over 15,000 nerve endings over the whole pelvic region. It’s made up of the same erectile tissue as the penis glans and engorges with blood upon arousal. However telling women that their clitoris is nothing more than a “bean” is like telling men their genitals are nothing more than the head of their penis. The glans is only the tip of the iceberg! 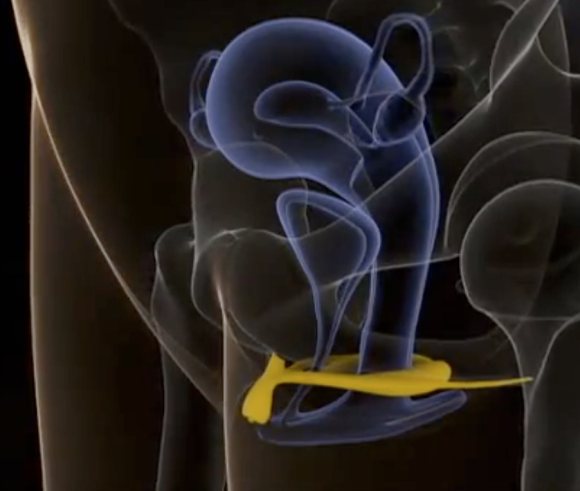 In 1998 Australian Urologist, Helen O’Connell, showed us the worlds first clearest imaging of the internal clitoris. O’Connell was frustrated with the vast amount of medical information on male genitals and the scarce information on female genitalia functioning. 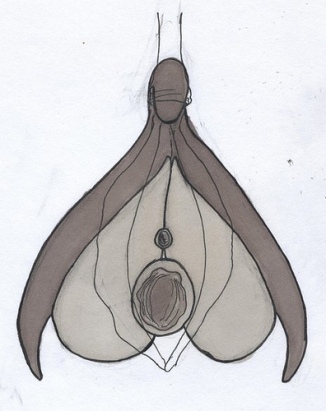 The internal clitoris also has two wishbone shaped crura which stretch toward the spine when erect. It’s much more complex than we imagined!
O’Connell says, “The vaginal wall is, in fact, the clitoris. If you lift the skin off the vagina on the side walls, you get the bulbs of the clitoris – triangular, crescental masses of erectile tissue.”

It wasn’t until 2009 that researchers in France -Dr. Odile Buisson and Dr. Pierre Foldès- completed the worlds first complete 3-D sonography of the aroused clitoris. It is very telling that they had to self fund their research.

Foldès performs reconstructive surgery on women who’ve suffered genital mutilation in an effort to restore their sexual sensitivity. Foldès was dumbfounded by how little research has been done about the clitoris and its functions, when he found thousands of extensive and well funded studies into the penis and surgical procedures.

“When I returned to France to treat genital mutilation, I was amazed that they were never tried. The medical literature tells us the truth about our contempt for women. For three centuries, there are thousands of references to penile surgery, nothing on the clitoris, except for some cancers or dermatology -and nothing to restore its sensitivity. The very existence of an organ of pleasure is denied, medically. Today, if you look at the anatomy books that all surgeons have, you will find two pages above. There is a real intellectual excision. “

I’m disappointed by the lack of attention given to the clitoris. Medical textbooks simplified the clitoris to a small nub and in the 1940’s it was erased from anatomy diagrams altogether! It is an injustice to deny this epicentre of female sexual pleasure.

Did you catch my latest sex column in Sydney’s CIAO magazine?
You can check it out at this link or read it below http://www.ciaomagazine.com.au/why-hes-not-in-the-mood/

Society tells us that men are always ready for sex, perpetually randy and constantly thinking about it, while apparently women need to be emotionally in the mood for sex because their sexuality is not as ‘simple’ as a man’s. In reality however, low sexual drive in men is very common and male desire is just as complex as women’s.

These myths can cause problems in relationships, especially for the partner of a man with low sexual desire. Women can often take the rejection personally when grappling with mismatched libidos because of the societal beliefs that men want sex all the time.

In fact, the idea that men could suffer from low sexual desire has been so off the map that researchers have usually focused on ejaculation problems or erectile dysfunction when studying male sexuality. Meanwhile, sexual desire was ignored completely. Only recently is this under researched area finally getting a look in.

Simply put, Hypoactive Sexual Desire Disorder is persistently deficient sexual fantasies and desire for sexual activity that causes distress and interpersonal problems. In men, it is an under reported and stigmatised sexual dysfunction because it runs contrary to cultural myths about male sexuality.

One in five men has HSDD according to The American Psychiatric Association and other studies say between 13 and 30 percent of men report they have had a digressing lack of sexual desire lasting two months or longer in the past year. Just like female sexual desire, male respondents report social, relationship and psychological reasons for their lack of desire, such as depression, work, stress, tiredness and poor communication in their relationships. Drugs, alcohol and some medications can also hinder libido.

Sexual anxiety plays a huge part in waning desire too, with men being five times more likely to report low sexual desire if they had low confidence in their erections compared with men who didn’t worry about their erections at all.

So how do you solve a problem no one wants to talk about? Studies show pumping a man full of testosterone doesn’t translate into more desire when there are long-standing relationship issues. Men popping Viagra may get a whopping erection but it doesn’t improve sexual desire. These shortcomings in medical treatments highlight the importance of holistic therapy in overcoming HSDD.

Sessions also help expose and re-write irrational thoughts that block desire, such as fear of commitment and abandonment. Ultimately though, people sometimes just need a little help prioritising pleasure and intimacy over intercourse and orgasm.

I remember in sex education in school never learning anything about the female orgasm, in fact I don’t think the words were even mentioned! I remember the emphasis on male orgasm depositing sperm into the vagina  and that was about  it.  There was never any mention of the clitoris getting erect or the entire labia area become engorged with blood and “puffing out” or how the vagina actually lengthens and changes shape when a woman is turned on.

There’s a lot of ignorance and misinformation about the female orgasm and female pleasure and looking at our sex education is there any wonder why?  A recent study of women in Sweden sheds some light onto women’s experiences with orgasm. The study asked almost one a half thousand women about their experiences with orgasm. The women were predominantly heterosexual and their ages ranged from 18 to 74.

Such a fascinating study that shows the diversity of female experience and differences in female pleasure.. Almost 60% of women achieve orgasm through penis in vagina sex and over 40% of women don’t.  The majority of women have experienced orgasm. So when you are with a woman you can’t make any assumptions about “what women like” because as you can see, we like very different things!  Asking what she likes, is a great way to start…

For International Clitoris Week I’m going to harp on about the clitoris some more! The clitoris is such an incredible organ! It has more nerve endings than anywhere else on the human body, and twice as many on the end of the penis!

This incredible organ is not just a ‘bean,’ (that’s just the tip of the iceberg!) but actually mainly internal! The ‘glans’ (or ‘bean’) is connected to the shaft of the internal clitoris, which is made up of two corpora cavernosa.  When excited and erect, the corpora cavernosa swell full of blood around the vagina, as if they were wrapping around it giving it a big embrace!
These corpora cavernosa have two crura (looks like a wishbone when resting and not excited!) which  stretch toward the spine when erect. They’re coloured in a darker colour in the picture to the left.

You can see from the picture on the right, that the internal clitoris is very similar to the penis! In fact, I’m often disappointed by the lack of attention and research given to this increible organ. Textbooks often only show the external glans with no drawings depicting the inner clitoris! It is only recently (in the 1990’s) that a MRI was done of the clitoris for health and research, whereas men had already thirty years of research into pleasure and nerve endings in their penis!

An Australian Urologist, Helen O’Connell was the first person to show the world of medicine what the internal aroused  clitoris looked like in 1998. Medical papers published in response to her findings admitted that social mores had a lot to do with the lack of research into the clitoris and that it is “seemingly impossible it is to understand the internal structure of the clitoris with just one diagram.  Several are required to truly get a comprehensive understanding of it.”

It wasn’t until 2009, that researchers in France -Dr. Odile Buisson and Dr. Pierre Foldès did the worlds first complete 3-D sonography of the stimulated clitoris.  It says a lot about how we view the clitoris, that they couldn’t get any funding, and had to self fund their research for three years!

Dr Foldès is a surgeon for women who have undergone clitoral mutilation and has given pleasure back to thousands of circumsized women.

He too was amazed by how little research has been done over the years into the clitoris, when he found thousands of studies into the penis.

“When I returned to France to treat genital mutilation, I was amazed that they were never tried. The medical literature tells us the truth about our contempt for women. For three centuries, there are thousands of references to penile surgery, nothing on the clitoris, except for some cancers or dermatology -and nothing to restore its sensitivity. The very existence of an organ of pleasure is denied, medically. Today, if you look at the anatomy books that all surgeons have, you will find two pages above. There is a real intellectual excision. “

So there you have it! We are only now beginning to understand the internal workings of the complex and fascinating female genitals! Is it any wonder women can be confused when some of this important information is not included in textbooks?
Thanks to Ms M for the inspiration for this article..